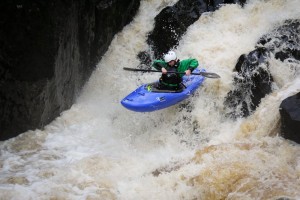 Kayaking Experience: I guess I can say 12 years now which sounds good. I paddled in the uk for the first 8 years improving my whitewater kayaking slowly. I have spent one summer season in the Spanish Pyrenees living near Sort working with the company Roc Roi. I also went on a trip to Ecuador in 2012 where I managed to kayak every day thanks to Small World Adventures who offered me a job so I could help guide groups. But moving up to North Wales in 2013 has definitely been the biggest step up in my kayaking to date. It is an awesome place to live and an epic training ground.

Favourite Food: Has to be ice cream. I can put away 2 litres in one sitting.

Favourite River: I could have a few but nothing puts a smile on my face like when I’m doing laps of the Fairy Glen at a good level. Apart from maybe the Glen, Lledr and Llugwy in one day.

Best Moment on a river: This was without a doubt on the Rio Oyacachi. It is a river of endless steep boulder gardens. I was at the back of the group sweeping up and I was just nailing lines and hitting boofs all over the place. It’s just a shame no one saw because I was at the back but I was on fire! Unfortunately everyone did see what happened next which I will explain in the next section.

Worst Moment on a river: I definitely went from a high to a low on this river but basically because I was having so much fun on the Oyacachi that when we reached the confluence with the Quijos where there is a wave called “the thing” I decided to give it a surf. My first mistake was not taking into account that the river level was lower so instead of a wave I was paddling into a hole. My second mistake was, after I’d been in there for a minute or so, not swimming. Instead of swimming I decided to put my blade deep to pull me out of the hole. It definitely pulled. It pulled my shoulder straight out of the socket. I owe so much to Darcy Gaechter who dragged me to the side of the river and popped it back in and to Liam Kirkham who held the rest of me down.