After paddling the Ikopa we decided to head East for some more exploratory paddling. We headed towards a 150 km section of the Ivondro. Being a first decent as well as longer, steeper and more remote than what we had already done we were very excited. We started the mission by spending a night in Ambatondrazaka. The next morning we bought supplies for 8 days on the river (expecting to take about 5 days) and started our day of off roading attempting to get as close to the river as possible expecting to have to walk the last part of the journey. 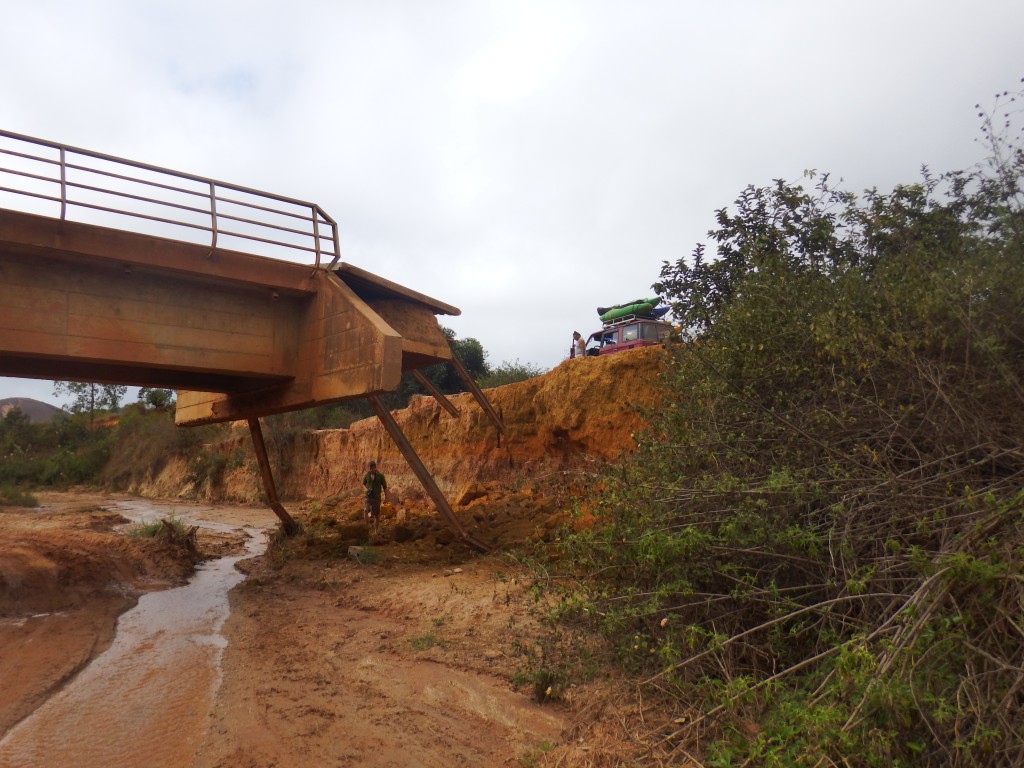 Broken bridge – one of the many challenges we faced on the road.

Late in the day after some exciting driving we had managed to get within a kilometre of the river. We sorted our kit in Ambodifano before a local man showed us through rice paddies and jungle paths to the river. Covered in mud, we put on the river just before sunset in hope of getting to a rapid to camp next to, but ended up running out of time and camping next to still water and accepting the mosquitoes that accompanied us. This river was already feeling more remote than what we had already been doing with the sound of lemurs (very rare) and no local people in sight. 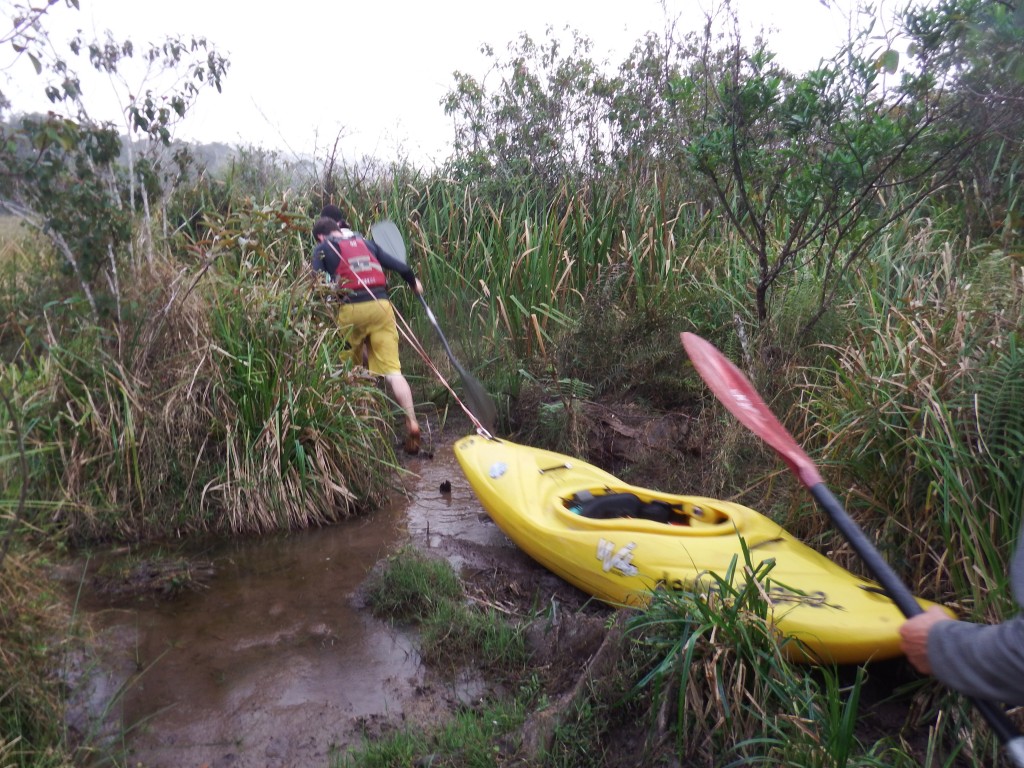 Leslie traveling the last part of the journey to the Ivondro by foot.

The next morning we were up at sunrise and started the day with the usual sugar with rice. Soon after getting on the river we reached our first rapid – a three part slide ending in a smooth sloping boof. This was soon followed by our first portage, simply climbing over the rocks as the river went through them. 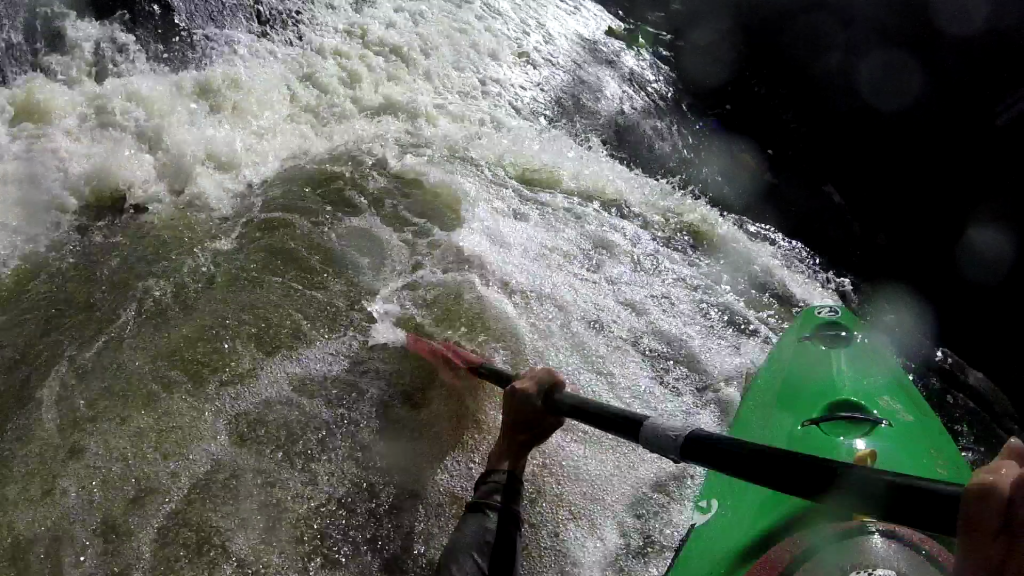 Sam at lip of sloping boof

Some chilled rapids followed before we reached a steeper narrower section accompanied with a bridge over the river. We eddy hopped a bit further down before reaching a fairly significant horizon line. A 5 meter drop with a chossy lead in followed by a smaller drop below that we couldn’t yet properly inspect. The 5 meter drop was good to go so we fired it up. The smaller drop below was very undercut and had a rock backing up the hole so we decided to give it a miss, portaging. 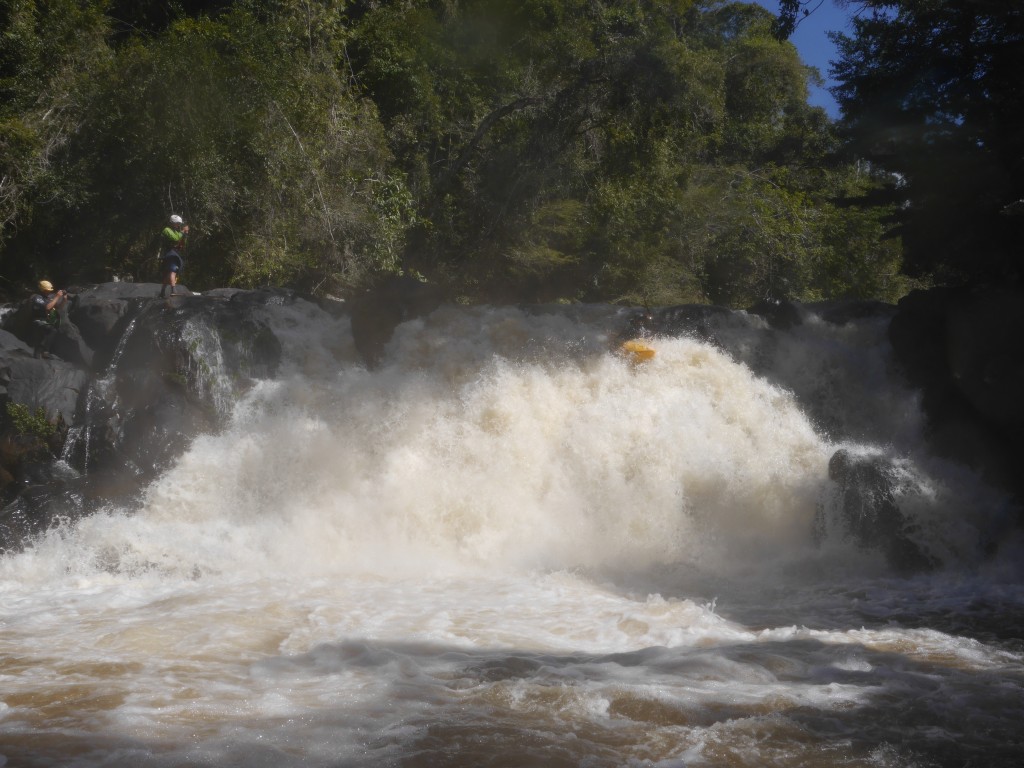 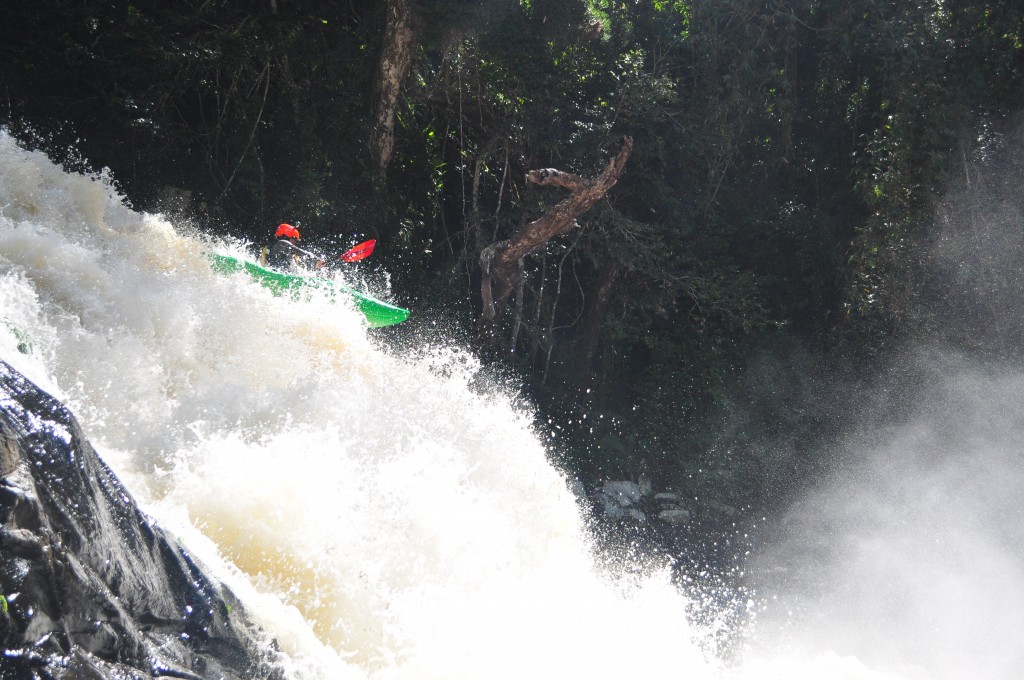 Easier rapids followed accompanied with plenty of flat water. Late in the day we reached a manky syphoned drop followed by a narrow slot with a tree branch in it. We portaged and set up camp on the rocks – a good day followed by noodles and a fire. The next day started similar to the previous, early sweetened rice and on the water early, but this time we were expecting a day of flat water. We got what we were expecting and uneventful morning of making progress on the flat followed by a lunch break (noodles and biscuits) followed by more flat water hoping to get to the start of the super steep 40m / km section of the river by the end of the day. By 2pm we had definitely reached the start of the steep, faced with our first tricky time consuming portage. This took about 2 hours moving boats and abseiling. We paddled the next rapid and set up camp. 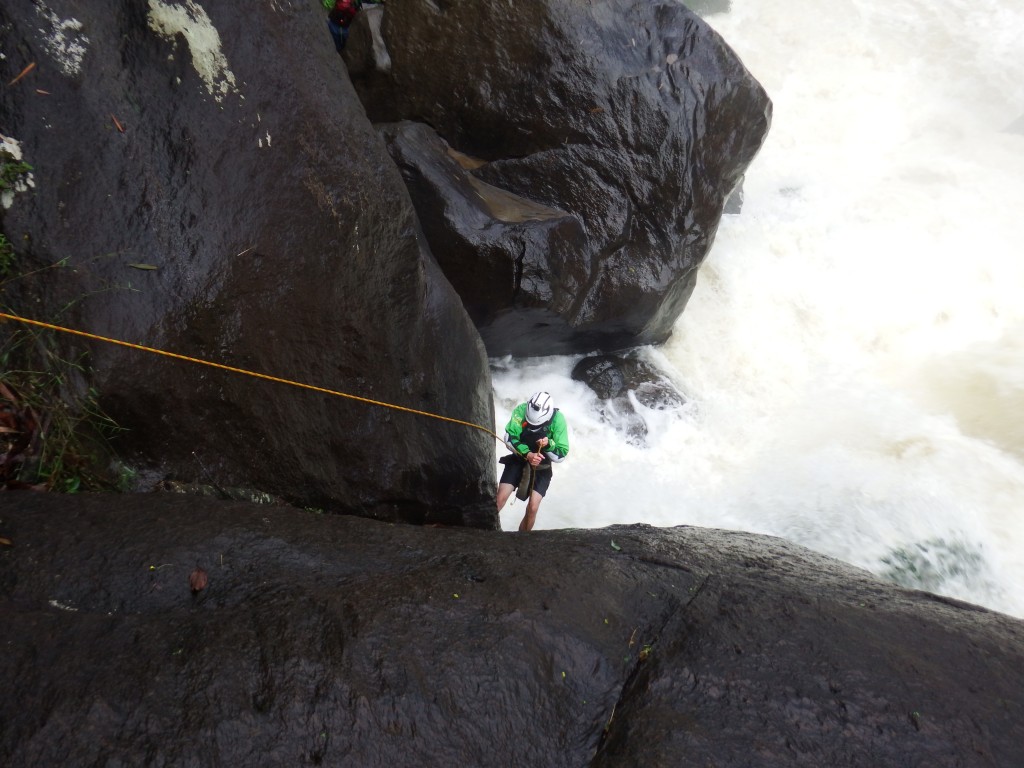 The next day after our morning rice we soon reached a massive horizon line. This drop was a manky 15m drop followed by big class 5+/6 rapids. Less than 1 km in to the 6 km very steep section we were starting to realise that is going to take us a long time! After realising the small paths on the left through the forest weren’t going to get us very far without a huge amount of time and effort we decided to abseil over the rock slabs on the right of the drop. Jacob went down first to scout the portage of the rapids below – we had found a way to portage so modified the abseil to use three throw-lines so we could retrieve the line and started lowering boats and abseiling. Portaging below the big fall was also time consuming to move on the steep slippery rock. After a whole morning of portaging we eat some food on a rock slab and dried some of our camping kit in the sun (It rains a lot at night in the rain forest). 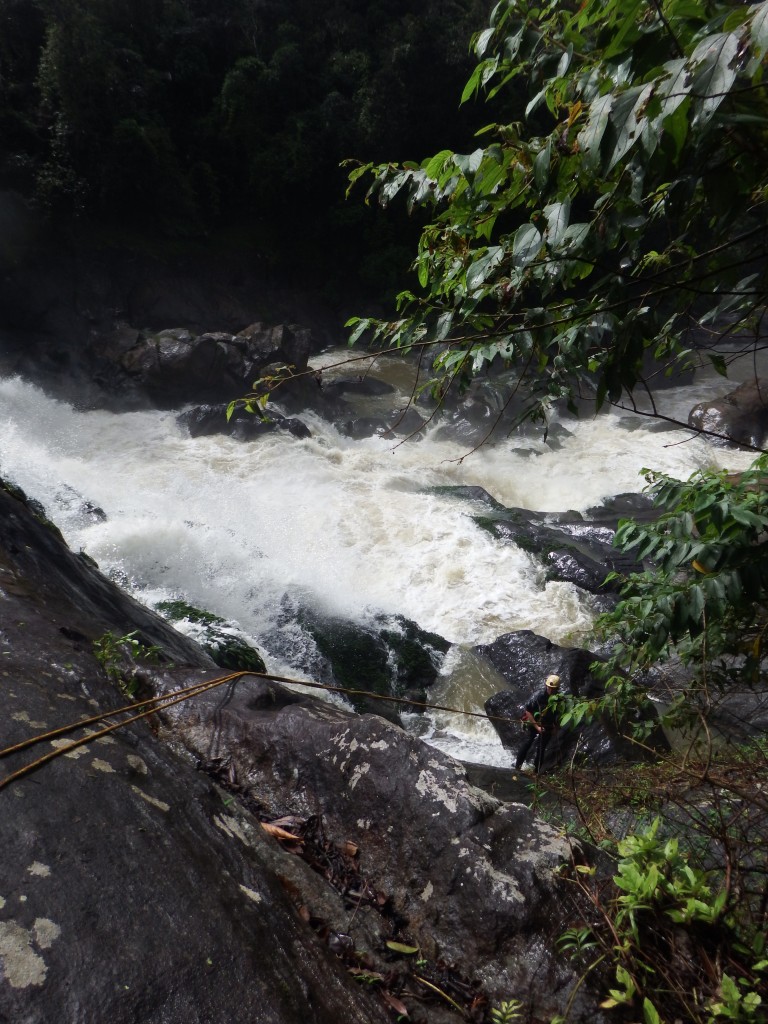 Campbell abseiling to base of 15 meter drop 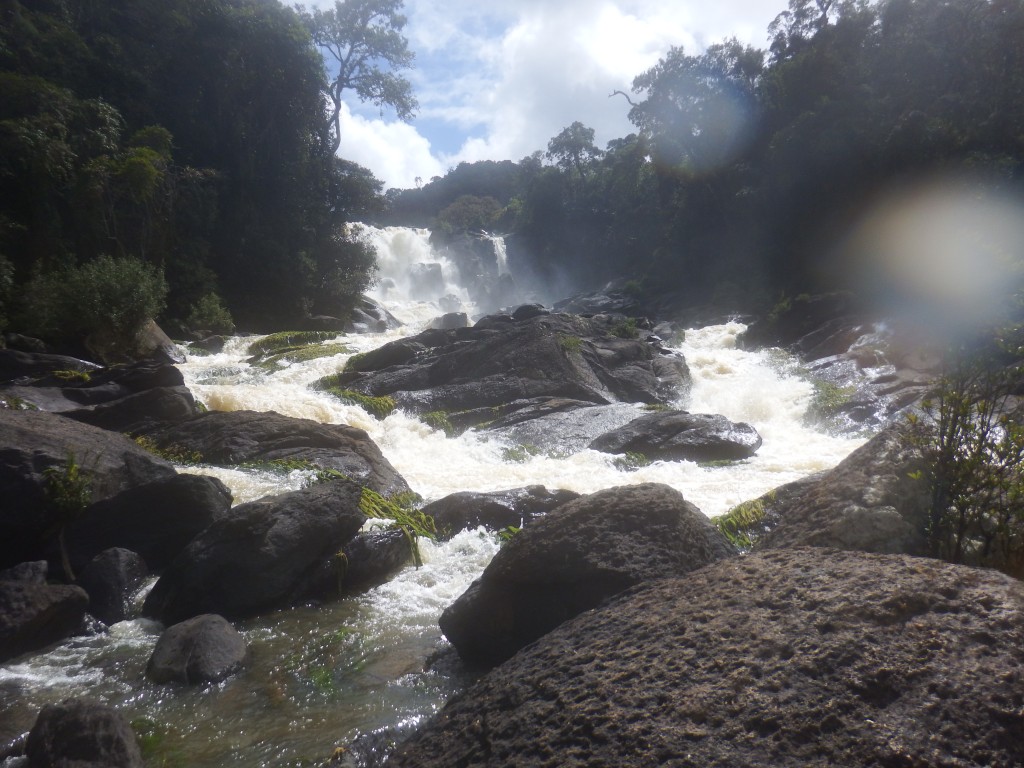 Big portage from below

The afternoon consisted of a lot more paddling, continuous difficult rapids heading down in to a big gorge. Near the end of the day we found our self in the middle of the gorge above an unrunnable section full of syphons. Camping options were limited, however following a difficult must make (I almost didn’t make) ferry we had some food and sleep on some large boulders.

In the morning we woke ready to portage on the rocks that had become slippery during the overnight rain. Portaging the last part was more tricky, so Matt and Leslie decided to run the last drop. Following this the rest of us decided to climb up a bit and absail in to the eddy below. That morning we continued down to a large rapid with big holes and many syphons and undercut rock. Campbell, Jacob and Leslie decided to run it the rest of us tried to portage on the left before heading back up stream and portaging on the right which required climbing though narrow gully under the rocks. A few more rapids before reaching a large rapid in to a manky 5 meter waterfall. We decided to end the day by camping before portaging. 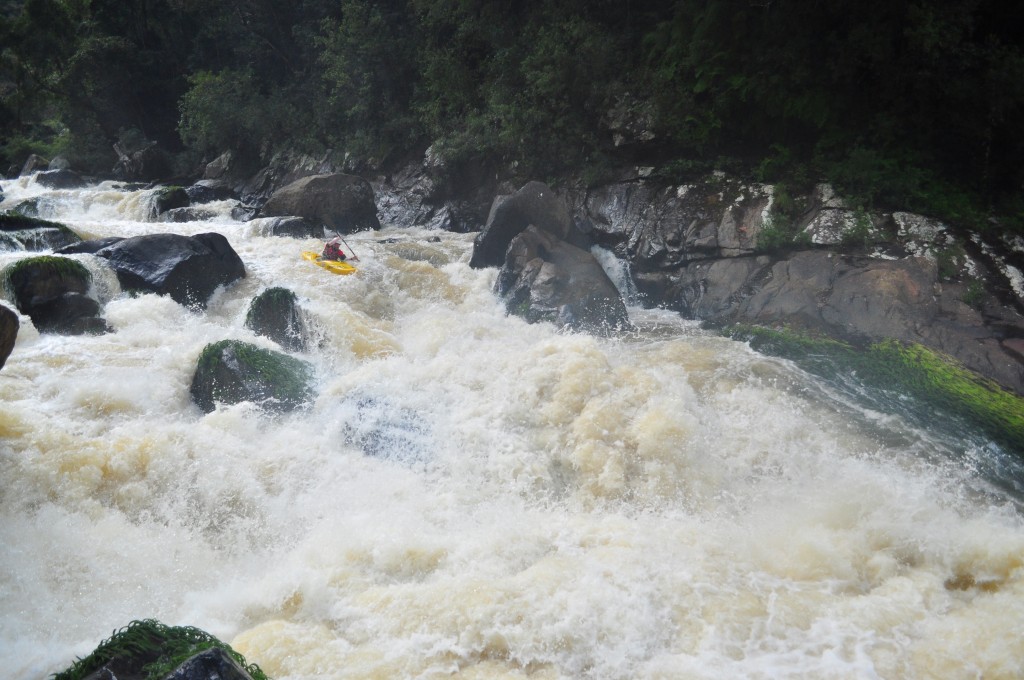 We had now spent 2 days only moving about 5 km! After a night of rain we started the day portaging the waterfall. Some of the team deciding to paddle the big rapid below it resulting in a swim after some time in a hole and some deciding to walk the rapid. The morning continued with some fantastic big rapids. One of which was a massive slide Jacob went first and following a good line on the slide got caught in a powerful boil at the bottom against a wall but managed to paddle out after a while. Leslie went second, exact same line, exact same boil, paddling out was less successful so decided to part with his boat to make an exit. After watching this, the rest of the team decided they would give the slide a miss this time. 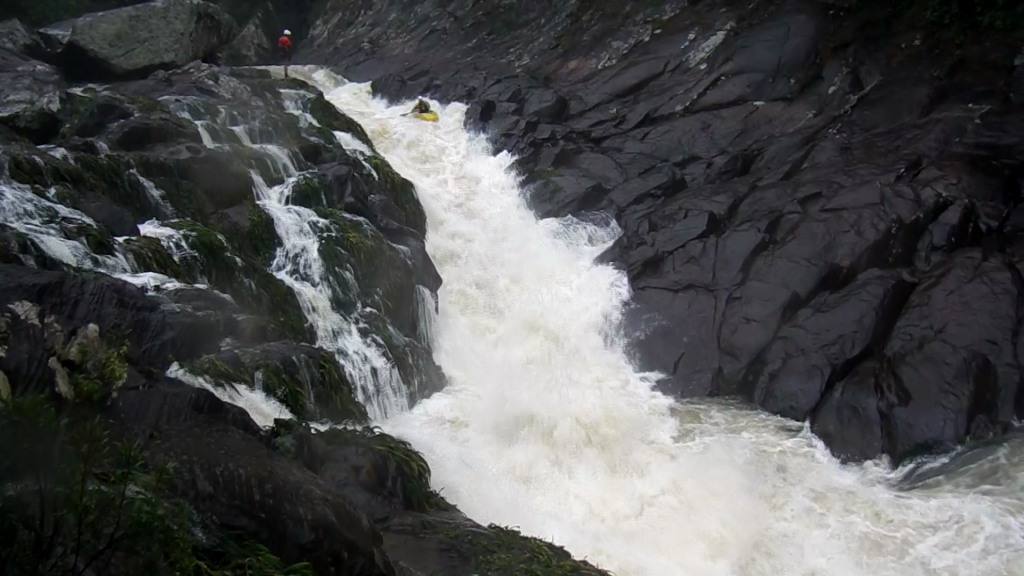 Jacob styling big slide before beatdown in boil against wall

By lunch time it was starting to feel like the gradient was decreasing and we were near the end of the steep section. We were not entirely correct – after some fun grade 3 / 4 we reached a massive horizon line. We were at a 25 meter un-runnable drop that ended in a cave-y pool. Since we were now out of the gorge locals were around and indicated that we could pass by following a track over the hill. We started the tiring walk on the narrow, steep mud track. Just before sunset we arrived at a small village where we bought a large quantity of bananas and were offered a room to stay in and rice with noodles. It was impressive that packets of noodles, and packets of biscuits could be bought in a village a three day walk from the nearest small road. We took this opportunity to dry our kit and buy supplies since it was looking like we could run out. 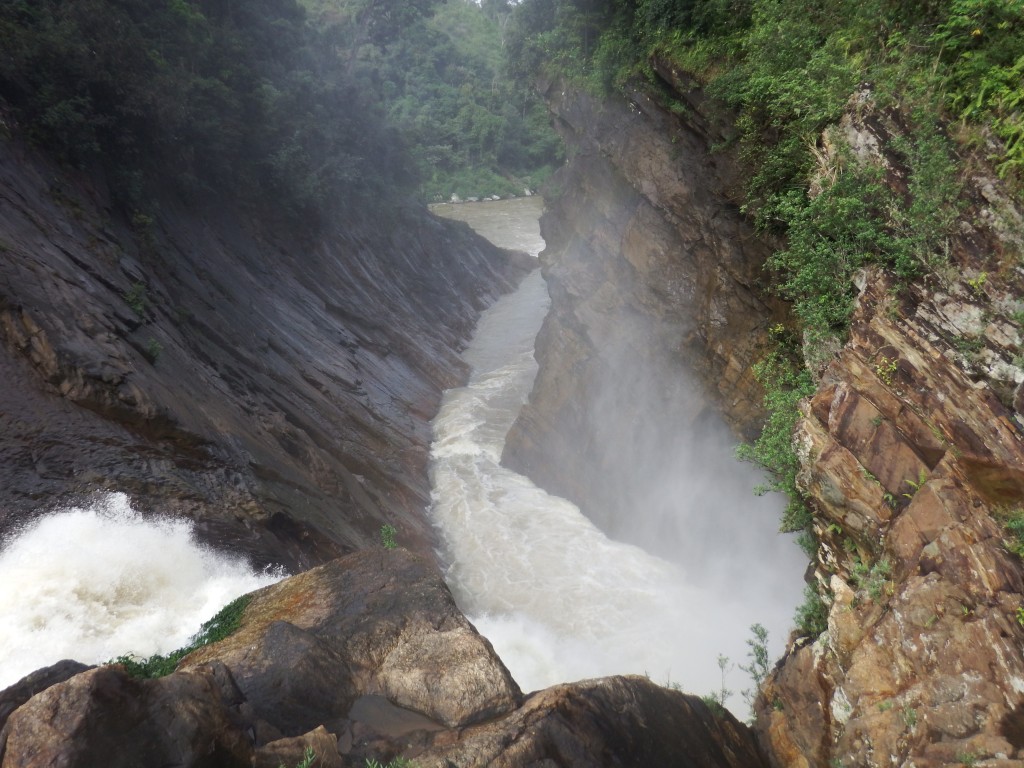 In the morning we worked our way back to the river having be told that there were more waterfalls downstream. The first fall we soon reached was a slide in to a cushion wave on the lip – the start of a great day! The rest of the day had lots of great drops and rapids and the portages were straight forward. Near the end of the day we reached a big waterfall that we portaged before camping… In the morning many of the team were regretting portaging it, but walking back up to run it was decided against to save time and effort. At this point we were all very tired and low on energy – a diet of noodles and rice for many days is not good!
The day continued with some world class rapids, however at this point we were often choosing the easiest option to get down stream. If a rapid was easier to portage than run we would often portage things that were good to go. Likewise if portaging was difficult it was tempting to run stuff that we probably wouldn’t choose to run otherwise. One of the highlights of the day was a massive slide in to a big hole with slots either side of the slide – a big hit at the bottom! 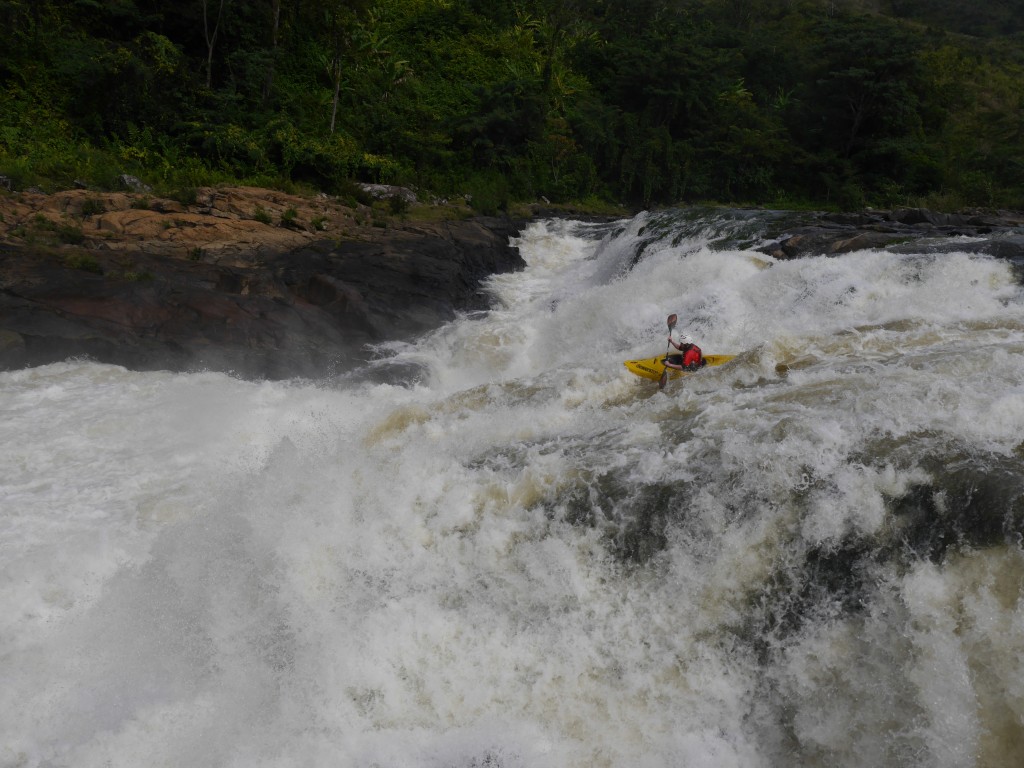 Leslie on slide in to big hit

By the end of the day we had reached easy rapids and flat water and tried to get as much distance covered as possible before ending our seventh full day of paddling on the river camping on some grass at the back of a small sandy beach.
We woke up to heavy rain and had a slow morning before a day of flat water to the end of the road. Despite there being more gradient and potential for more good rapids below we took out here and drove 5 hours to Tomisina to eat lots of food. 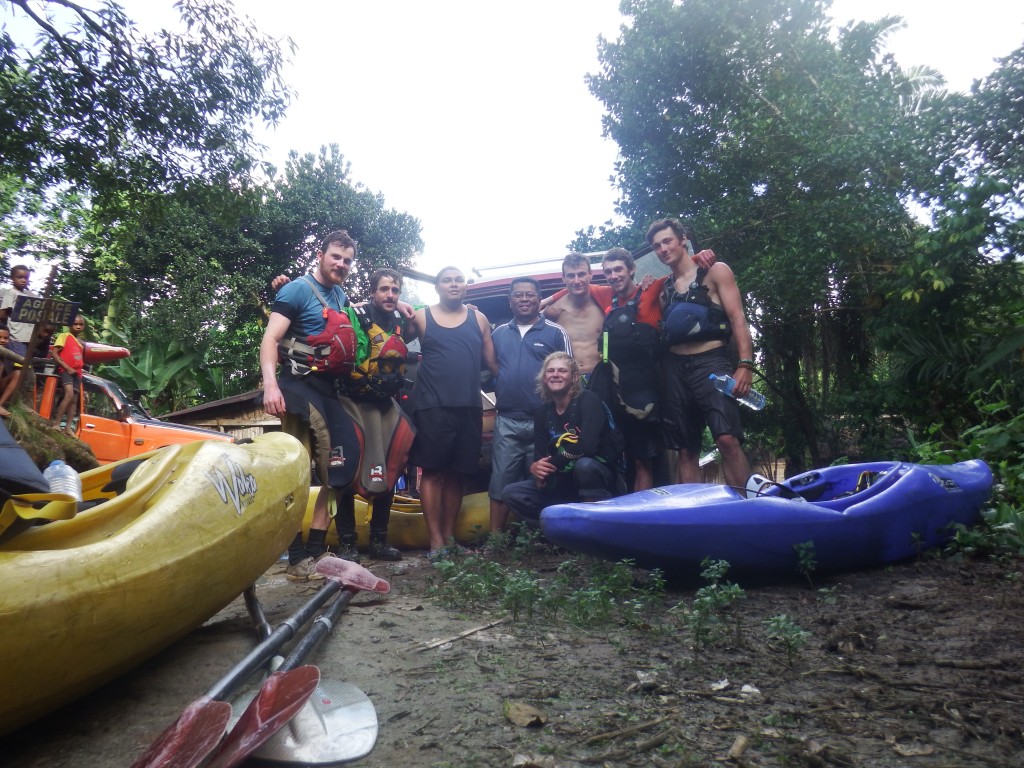 Blog post about us heading back to paddle the lower road side part of the Ivondro to follow!