We left Tana early on the 2nd of July to head back south to try and make the first kayak descent of the Sakaleona.  This river looks incredible on Google Earth and is far more continuous than anything else we have seen so far. The put in is at the bottom of the biggest waterfall in Madagascar, supposedly a 200m monster! We knew it wasn’t going to be easy to get to this river but no one could have foreseen the adventures which unfolded over the next 10 days!

Campbell, Josh, Leslie and Jacob had been on a night out in Tana the evening before which started with rum in the hotel room and ended with bribing a policeman not to put them in jail! They were are feeling a bit worse for wear this morning!

We had a day’s drive east and then south along the coast to the end of the tarmac road before the off roading began. The next day we carried on for another 80 km on dirt roads and tracks to Nosy Varika. The off roading was fairly easy as we were quite close to the coast so the tracks are made of sand and not so badly affected by rain.  We had to take a couple of ferries across rivers and ford a few streams to avoid broken bridges but we arrived in Nosy Varika without much trouble. Ferry number one, from Mahanoro 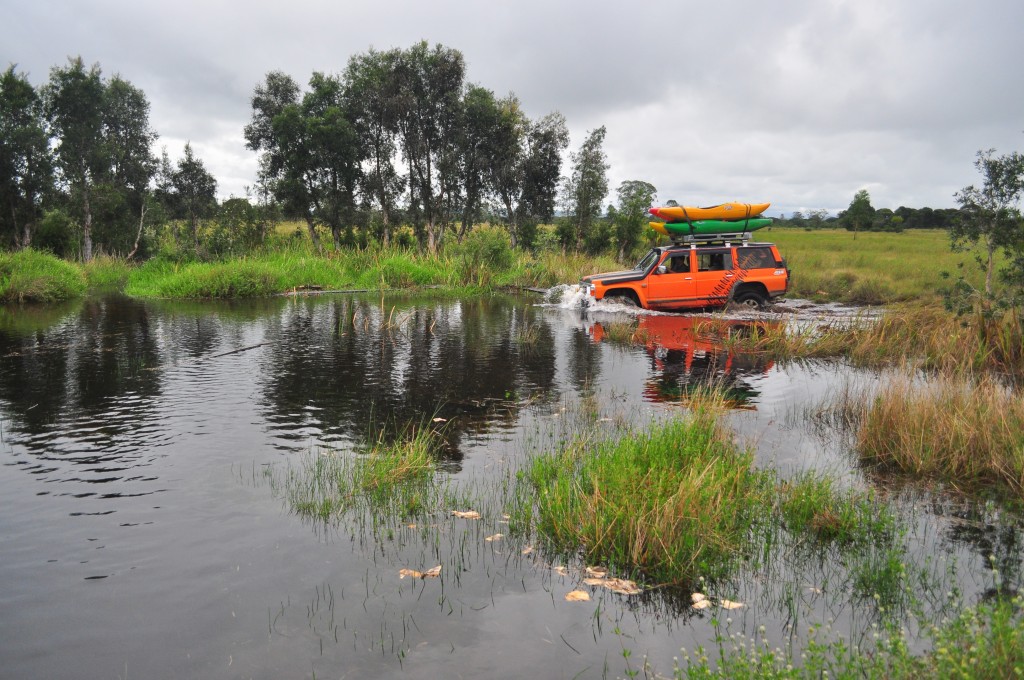 The most significant river crossing

That night we stayed in a hotel and drank too much cheap rum, we were not in a good state in the morning. Those who had been drinking had horrendous hangovers and those who hadn’t were ill, but we only had a day of off roading ahead of us so we could all sleep in the trucks, or so we thought… 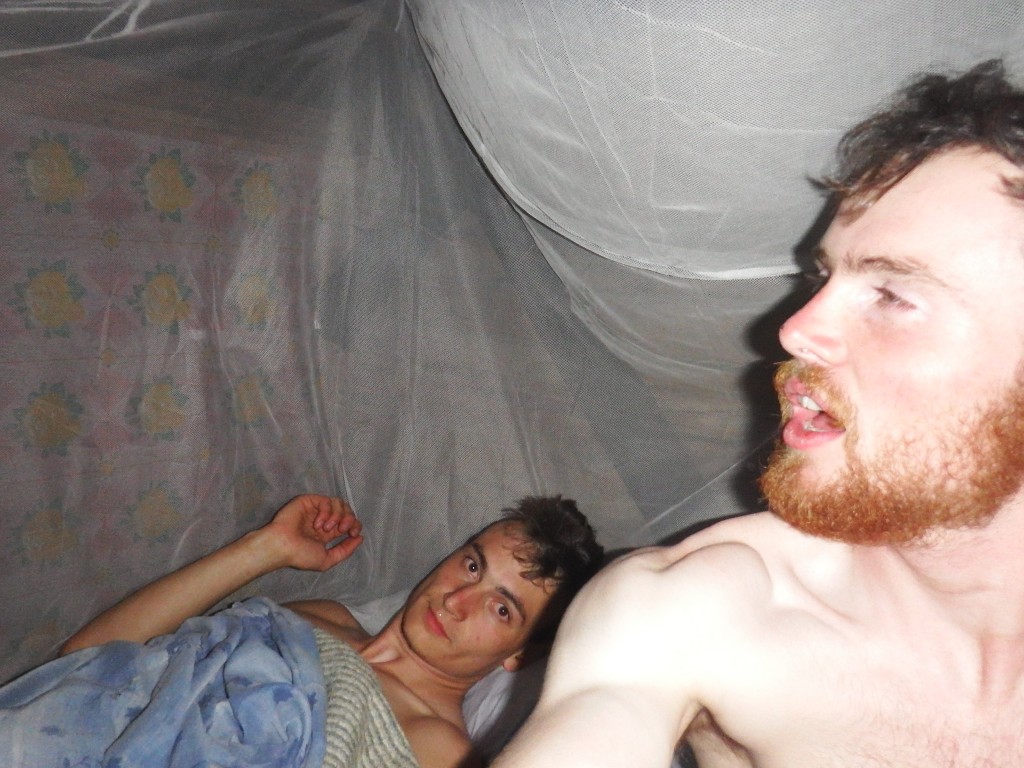 We got about 100m from the hotel before we were stopped by a closed road. From Nosy Varika we were heading back west inland and the roads changed from sand to mud, as the weather had been wet for the last few weeks the road was closed to prevent further damage to it. Unfortunately this problem required some thinking and decision making to solve, which in nobody wanted to do! But with the help of Andry we formulated a plan to get past the rain barrier, for 200,000 Airary (≈£50) we could get a boat about 40 km up the river to Sahavato ferry.  From there the locals told us we would be able to get a Unimog, which is a big 4×4 truck, to take us up the road to Ampasinambo which was near the put in.  We were all excited for the adventure which was unfolding and set about slowly packing our kit in our various unfit states, it took us some time and two different people pooed themselves that morning.  Finally at about 13:00 we left Nosy Varika in our boat. 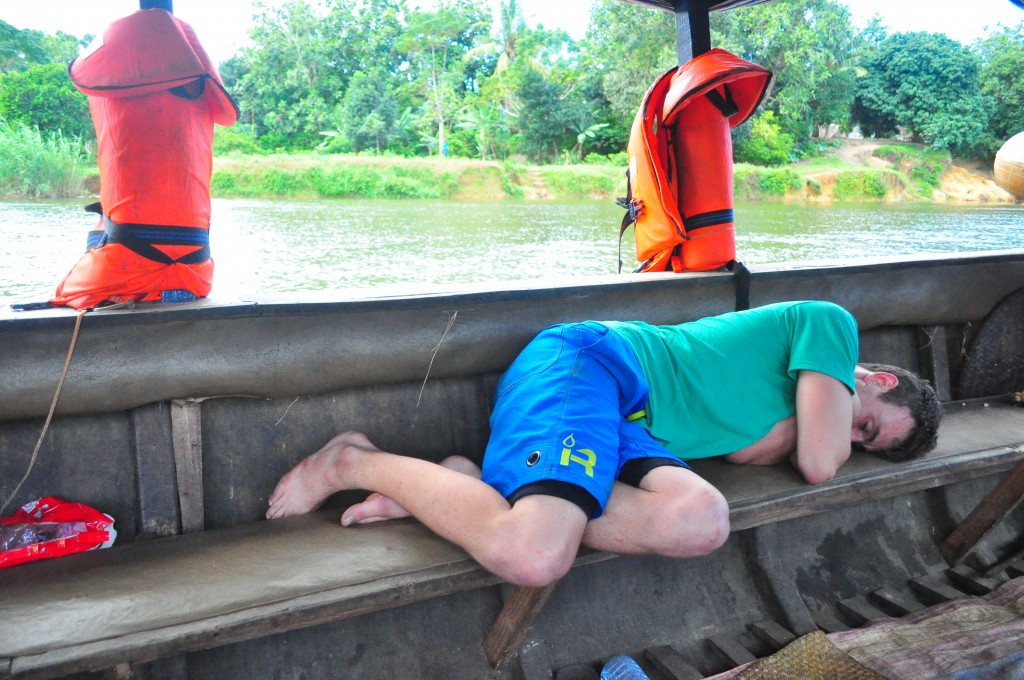 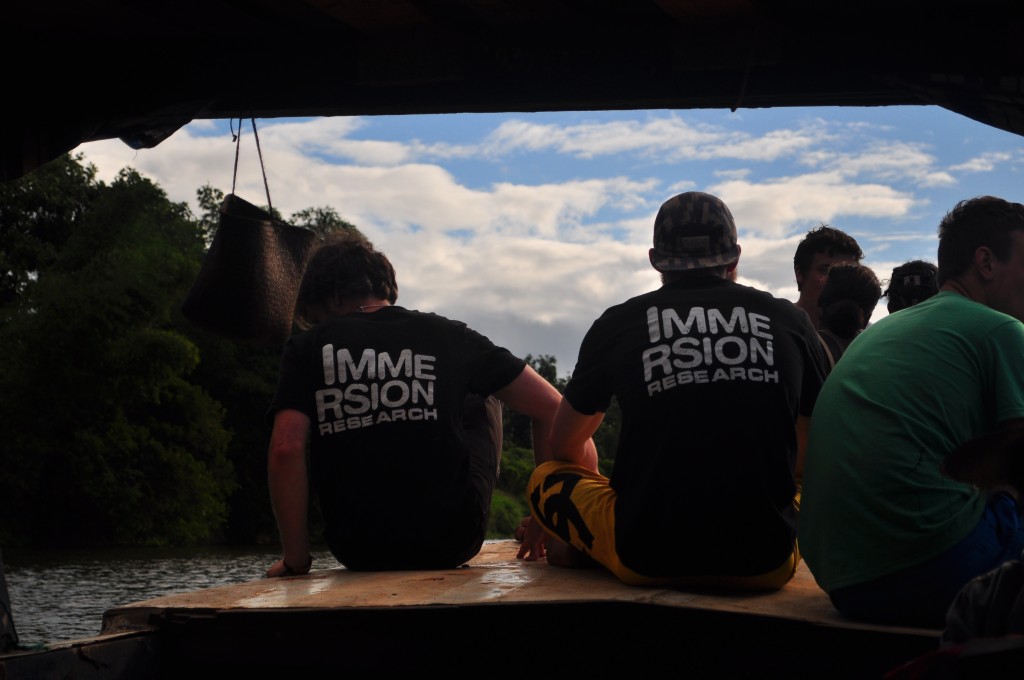 Twins enjoying time on the prow

It took about 4 hours to get up the river and we arrived just before dark. We had been given the number of someone to call who would help us sort out a Unimog but we couldn’t find any signal to call them.  We managed to find a random bloke by the ferry terminal who said he could get us a Unimog and that we should meet him at 07:00 the next morning.  It was now dark so we set up camp on the beach in the middle of the busy river port and went to sleep.

The next morning we packed up camp and crossed the river to meet our friend from the night before. Unfortunately we didn’t have much luck sorting a Unimog that day. While trying to find the guy from the night before we came across another person who reckoned he could sort us a mog for less money to take us twice as far, he told us we’d leave at 08:00 so we sat down to wait. When the guy from last night reappeared we told him we had already sorted it. 08:00 came around and nothing seemed to happen, we found our supposed driver and tried to find out what was going on, all of a sudden the price shot up and nothing was possible until tomorrow. When we went back to the guy from the night before he was now busy for the day and there seemed to be no other available Unimogs.  It was also clear that we only had enough cash to get to Ambodilafa which is half way the the put in, we would then have to walk the last 40 km to Ampasinambo.

With nothing to do at the ferry port Campbell, Josh and Jacob walked 5km up the road to Sahavato to try and find Patrick who we had been told to contact when we were in Nosy Varika. We got to Sahavato and were told Patrick would meet us at 12:00, then 12:30 and then 14:30 and then he never turned up.

At about 17:30 we all regrouped by the river, a bit put out by the lack of progress, and discussed our options over dinner.  We decided that as we had come this far we should try again in the morning and if we still had no luck by lunch time paddle back out to Nosy Varika.  Just as we were leaving the ferry terminal to find somewhere to camp a Unimog came down the road, in a last ditch attempt we went to see if they were available for the morning. We were put on the phone to someone who spoke broken English and they explained that we could go now, elated that the day was no longer wasted we piled our boats into the back of the truck and scrambled in on top! 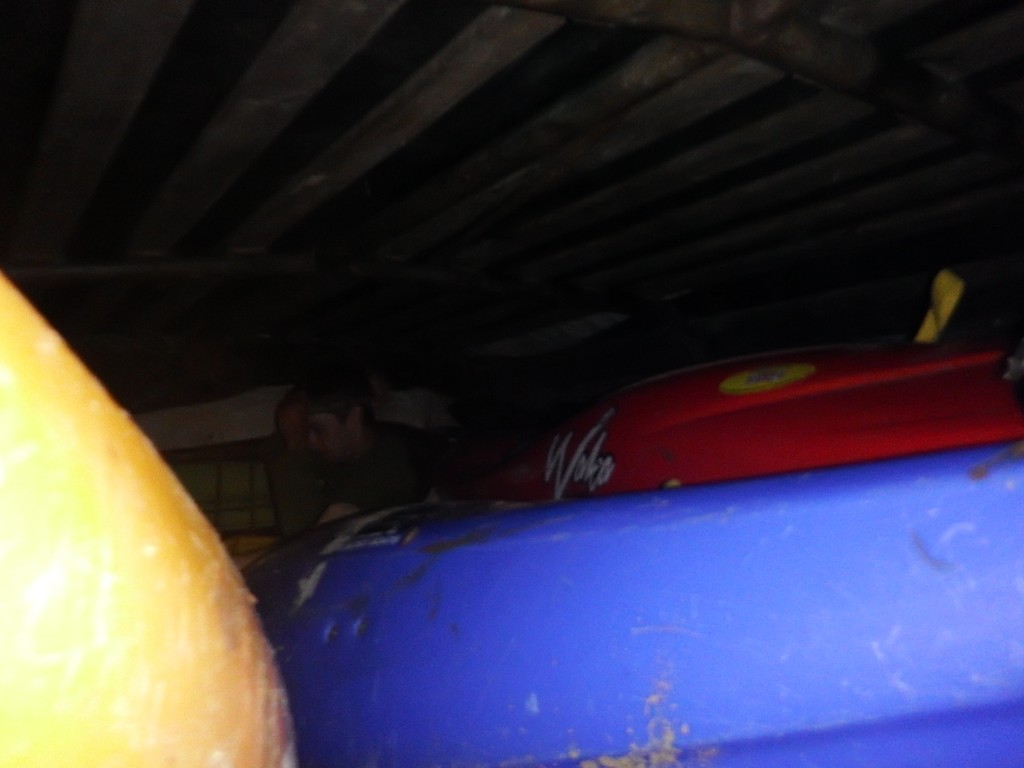 The solitary stable, if somewhat dimly-lit, image we have from inside the Mog!

At 19:00 we set off to Ambodilafa in the dark.  Our Unimog had no windscreen and no headlights, just a bloke in the passenger seat with a small torch! It was a long and uncomfortable journey being battered around in the back of the truck but finally at 01:00 we arrived! We set up camp just out of town and all passed out.

The next morning we all set up our different makeshift portage packs and set off for the first time carrying our loaded boats. At this point we ambitiously thought that we would be at the river in two days! We think with camping kit, damp kayaking kit and 9 days of food our boats weighed about a ridiculous 45 kg, in the the sweltering heat progress was very slow. We could barely cover half a kilometre before we needed to stop for a rest. Each time we stopped we then had to do a squat with 45 kg precariously strapped to our backs and regain our balance to go again. By lunch time our ETA had moved to 4 days away! 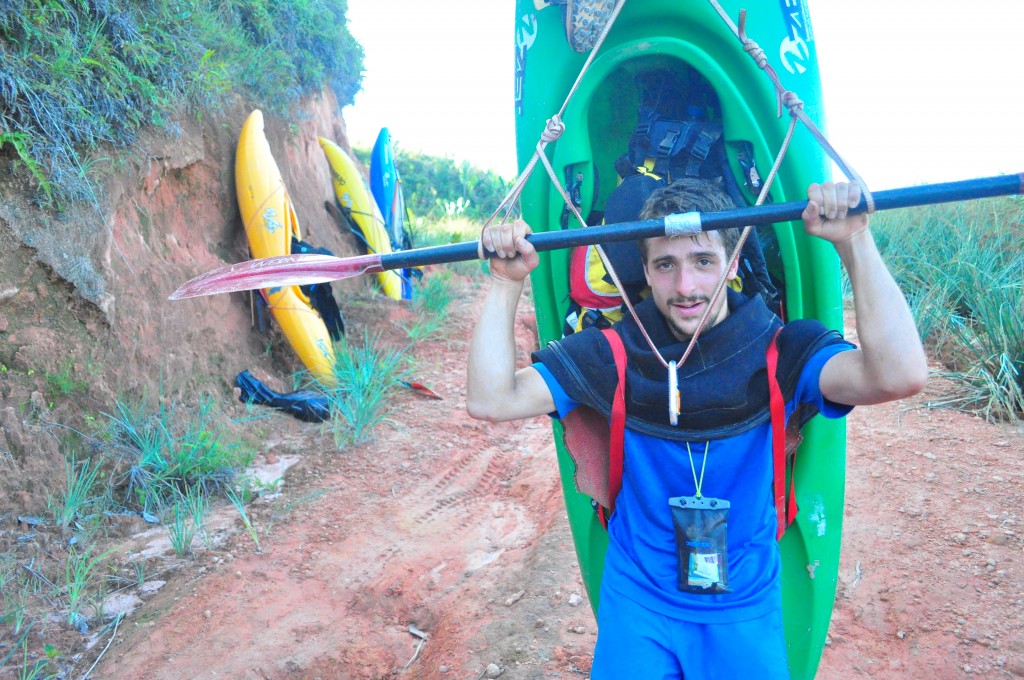 At about 18:00 we decided to stop for the day and rest as it was starting to get ridiculous. We had covered a measly 6 km in a whole day of walking. Josh’s arm had gone dead at some point during the day and was causing him a considerable amount of pain. We agreed to get up at 03:00 the next morning and carry on in the dark when it would be much cooler, we were all optimistic that progress would be better tomorrow!

We woke at 03:00 the next morning and it was quickly clear Josh’s arm wasn’t any better, after 8 hours of rest it was still completely dead and he could put hardly any weight on it.  We took the decision to turn around, even if we did manage to get to the river there was no way Josh was going to be in any fit state to paddle 4 or 5 days of hard white water! As we had no more money left, so couldn’t afford a Unimog back we decided the best plan was to walk back to Ambodilafa where there was a river which was big enough to float down, this would take us back to the Sakaleona at Sahavato ferry. From there we could paddle the 40 km of flat back to Nosy Varika and our trucks.

The first job was to fashion Josh a sled so he could drag his kayak instead of carrying it. We set about  hacking down some tree branches with our machette and lashing together a simple sled with guy lines. At 05:00 we set off back the way we came. We made much better progress in the cool morning and by 09:30 the first if us had reached the river.  Some of us went back to help Josh, although his sled worked okay on the flat it was incredibly hard to drag up hills! 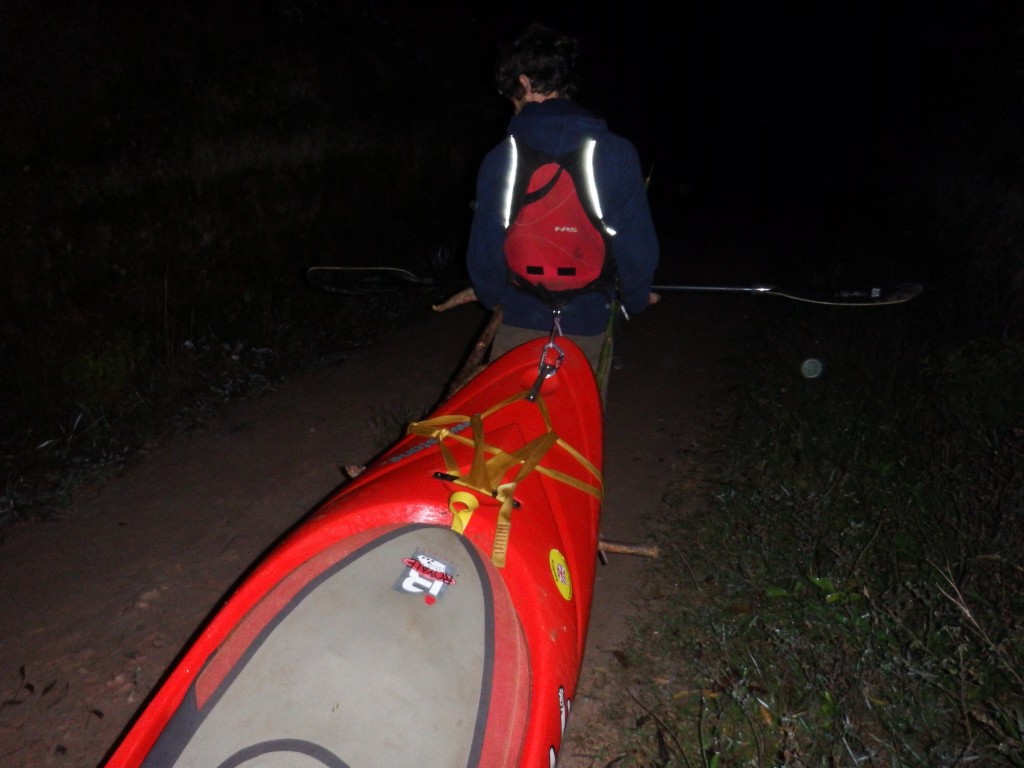 We were all battered and aching after our relatively short walk with boats, most of us have raw patches where our boats have rubbed.  I think we all agree we would need to shave a considerable amount of weight off our boats before we try carrying them again! We got bananas and coffee in town for lunch before getting on the river, it was incredible to be cool and able to move easily again! That afternoon we paddled for a few hours on flat water with one portage before setting up camp early and cooking a massive meal!

We were on the Sahavato river which we believe is a first descent, it was far too low and to get down most of the rapids we had to pick and push our way between the rocks.  There were a few good slides slides and drops in our second day of paddling and we all agree it would be a good run with a lot more water, perhaps one for the end of the rainy season/ early dry season.  That said it was far better than walking out with our boats!  Josh’s arm was still very weak and painful and paddling was seriously hard work for him, at the end of the day Campbell was towing him on the flats. Jacob on the first chossy slide By this point it had been seven days since we had left Tana, we were all keen to get back to the trucks as quickly as possible and get out of this area! We discussed our option that night and there was talk of paddling the last 50 km of flat overnight so we could drive back the next day, but we finally agreed that the best plan was to get up at 04:00 and be on the river at first light then paddle the full 50 km in one day. 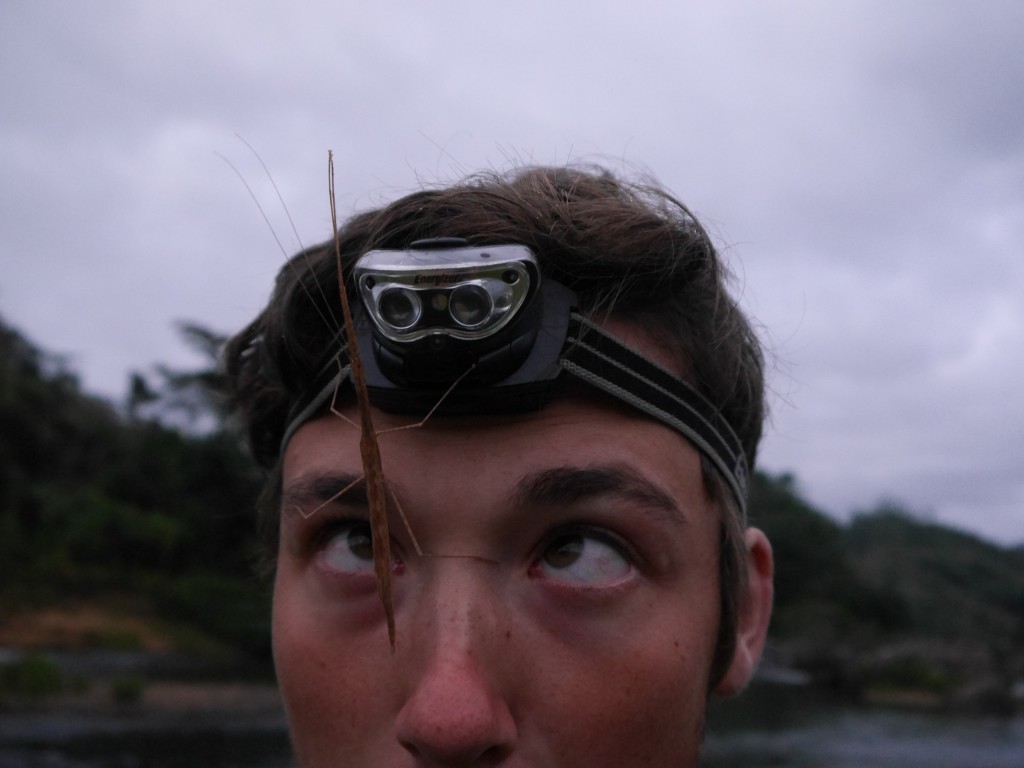 Campbell enjoying the company of Frank the stick-insect! 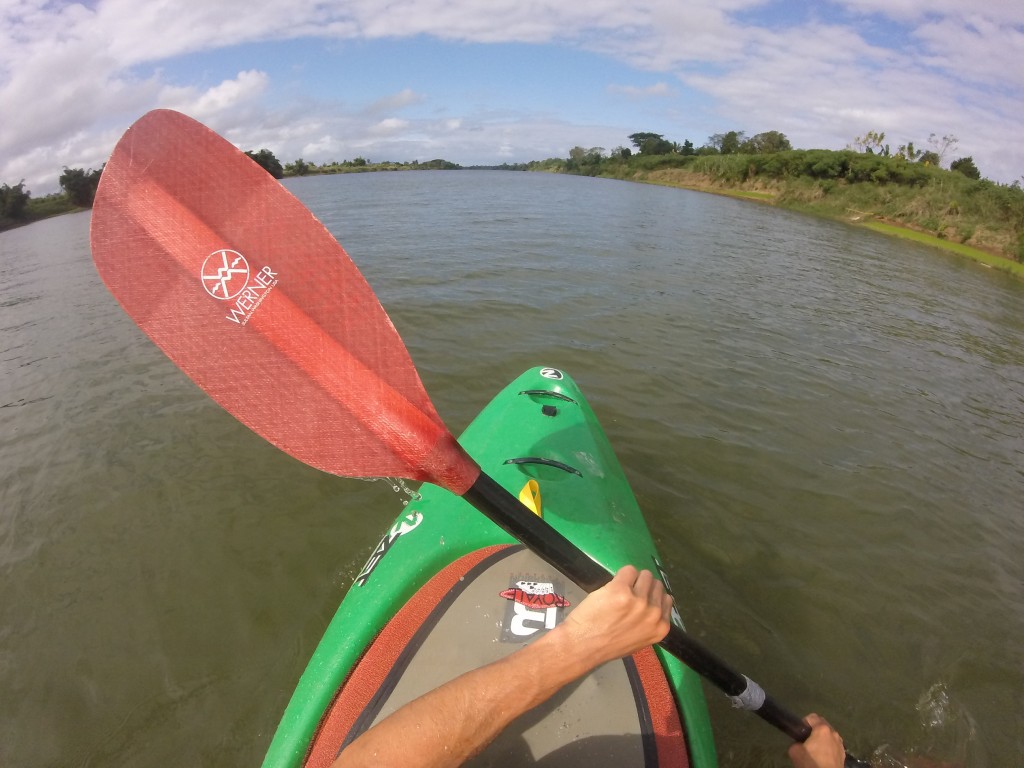 Sam smashing out the clicks on our final day

It was a long day’s paddle! We were on the water for  about 12 hours with only a few short breaks, for most of the day we took turns towing Josh to help reduce the strain on his shoulder. We got back to Nosy Varika at about 18:30 just after dark and were all knackered and staving! That night we stayed in Nosy Varika before starting the two day drive back towards Tana and the beginning of our big feed!

Although it was an unsuccessful mission it’s all part of expedition kayaking and was a good adventure!  We are now resting in Tana for a day and hopefully Josh’s arm will recover! Next we are off to the Ikopa, a Madagascan classic and supposedly one of the best sections of river in the world!