Following the by turns punishing and invigorating lessons taught by our previous endeavour on the Sakaleona, the team began the return journey to Tana in dire need of a pick-me-up. This morale boost manifested itself in multiple gastronomic outings, not least of which was a visit to the fantastic Chinese speciality restaurant of our driver, Andry, as well as a jaunt to sample the all-you-can-eat meaty delights of “Carnivore” – a trip that Sam and I lamentably missed on account of illness (the reader may be pleased to know that both Sam’s and my bowels are in fine fettle at the time of writing!). Besides the culinary, the purchase of some rather dazzlingly snazzy evening-wear (certain garments of which will doubtless be commonplace on catwalks in Paris and Milan next year) in Tana’s “Soixante-Sept Hectares” market brought the spring back into all our steps.

Nonetheless, the question weighing on everyone’s minds was where to go next; our original plan of heading to the seven-day commitment of the Maningory seemed a daunting prospect, especially considering the volatility of Josh’s injury. In the end, a providential meeting with Tyler Bradt, Isaac Levinson and the rest of the Wizard’s Eye crew convinced us to head north-west to the single-day Young Guns section of the Ikopa, described by Levinson as one of the greatest rivers he had ever run. This section, achievable in under one day, ought to give Josh a reasonable impression of his shoulder’s integrity, without the danger of nearly a week’s paddling or hiking on a serious injury. 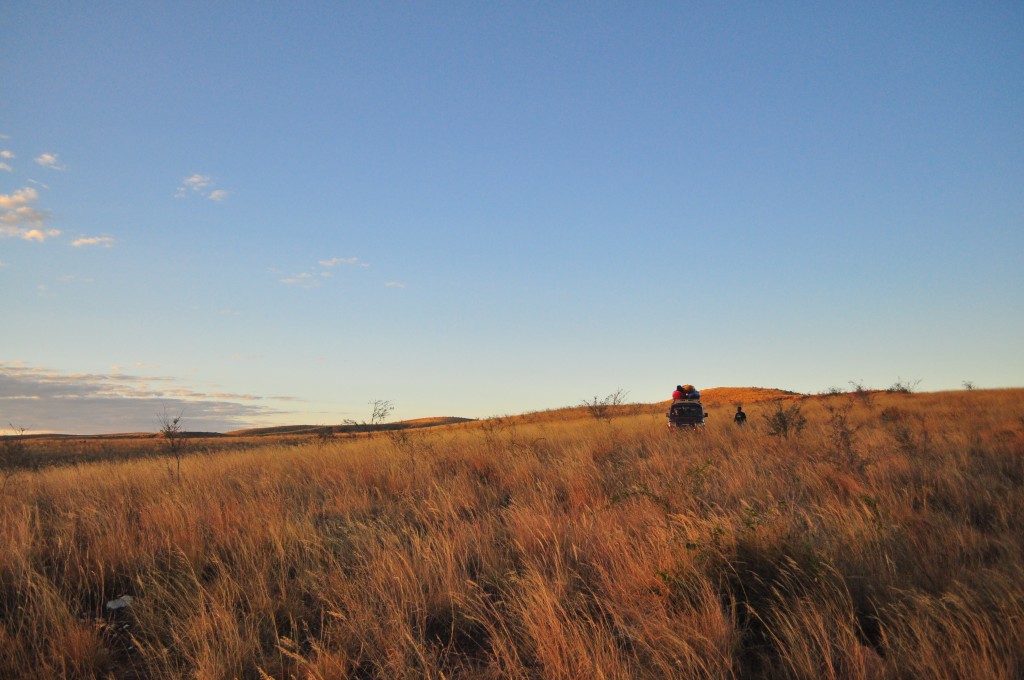 The Main Tirano region, through which the Ikopa wends its merry, or, in the case of the Young Guns section, hectic, way, is far more arid than parts of the country we had previously visited. It seems that little of the Madagascan countryside has successfully escaped deforestation and subsequent desertification; the land is unquestionably still the greenest and most ruggedly beautiful place I have ever had the delight of seeing, but the small glimpses of native virgin forest we have had suggest a former majesty that would have been wondrous to behold. Journeying to the Ikopa took only 6 hours, meaning that by mid-afternoon on the 13th of July we were setting up camp in this dry landscape of hard-baked mud and yellowing long-grass, overlooking the put-in. After a hearty meal, and with some of us revelling in the joys of sleeping on the rooves of our 4x4s, we settled into our sleeping-bags, lulled into dreams of paddling un-laden boats on some of the largest volume, steepest whitewater we had ever seen! 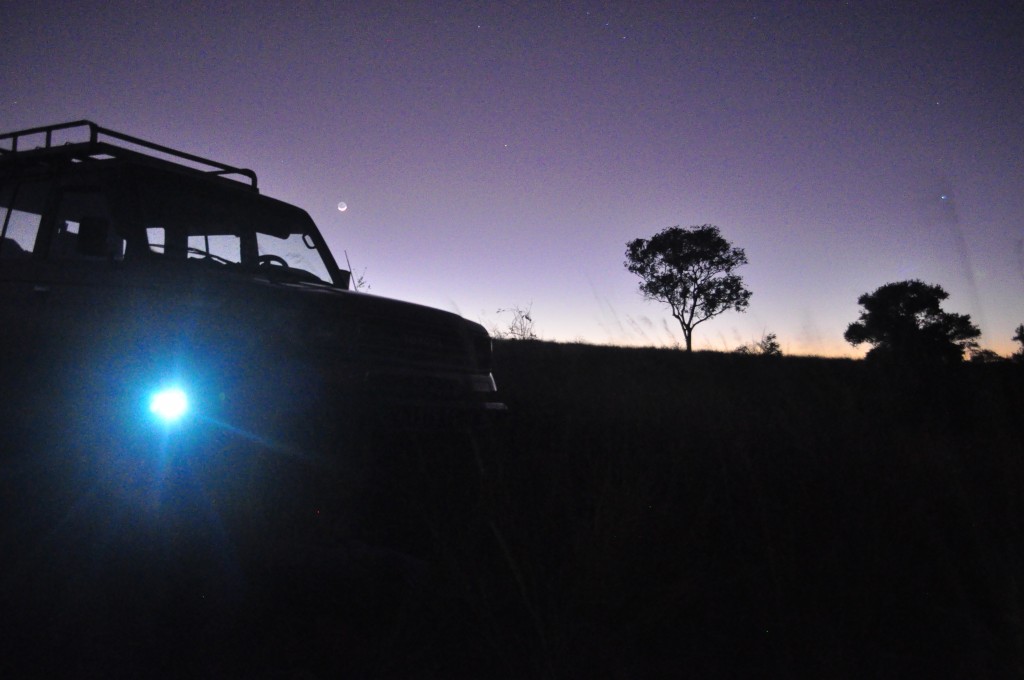 Dawn breaks through the 4×4

Rising before the dawn, we breakfasted and were on the river shortly after the sun was risen. Now came the moment of truth for Josh, who had been debating whether or not to paddle since the day before. Having tested the injury at the put-in, much to everyone’s disappointment, Josh was forced to decide against paddling, leaving the six of us to complete the section. Feeling somewhat out of sorts, both due to Josh’s decision and the unexpected responsivity and manoeuvrability of our emptied boats, we pressed on downstream through the early chossy grade 2 and 3 rapids.

After around 5km of fast-moving flat, punctuated by the occasional bouncy wavetrain, we were at our ease and beginning to wonder if we hadn’t accidentally put on the wrong section. Then came the first horizon-line, with random bursts of spray exploding skywards beyond, and all such thoughts vanished! Thereafter, the gradient ramped up, with huge tongues, crashing waves and surging eddy-lines that swallowed our boats, span us, flipped us and left us grinning like imbeciles! Soon after this accelerando in pace came the first rapid that required scouting, a relatively simple, but nonetheless intimidating, move, down a colossal wavetrain, aiming right towards the end to avoid a formidable pour-over, before catching a curler and type-writering left again. Upon reaching the bottom, Leslie, Jacob and I exchanged high-fives, whoops and congratulations, agreeing that it was probably the single largest rapid we had ever run! 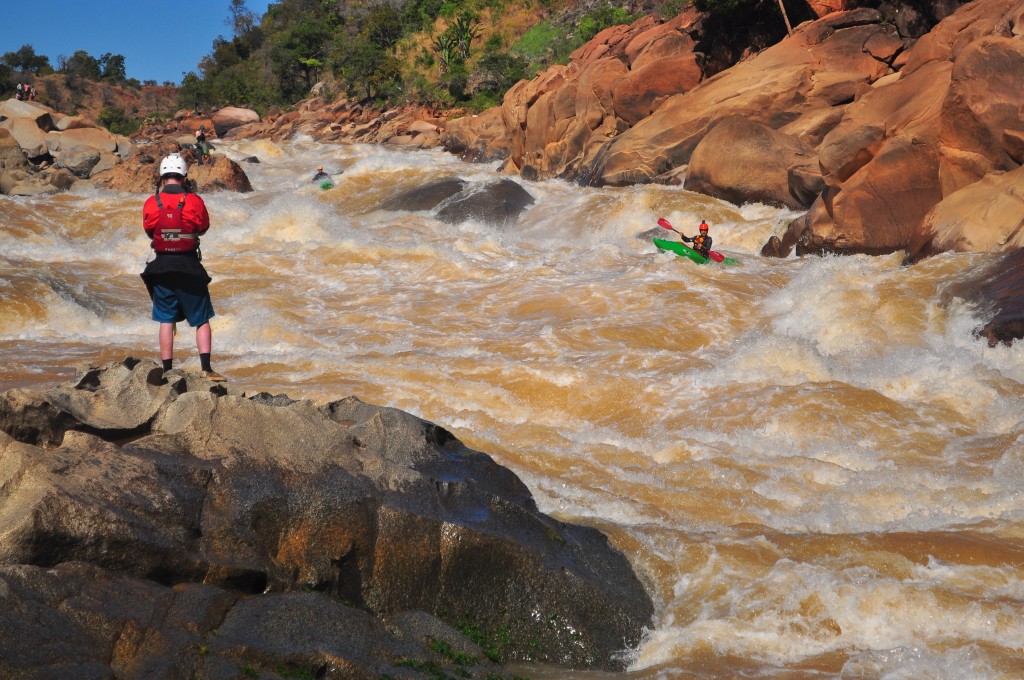 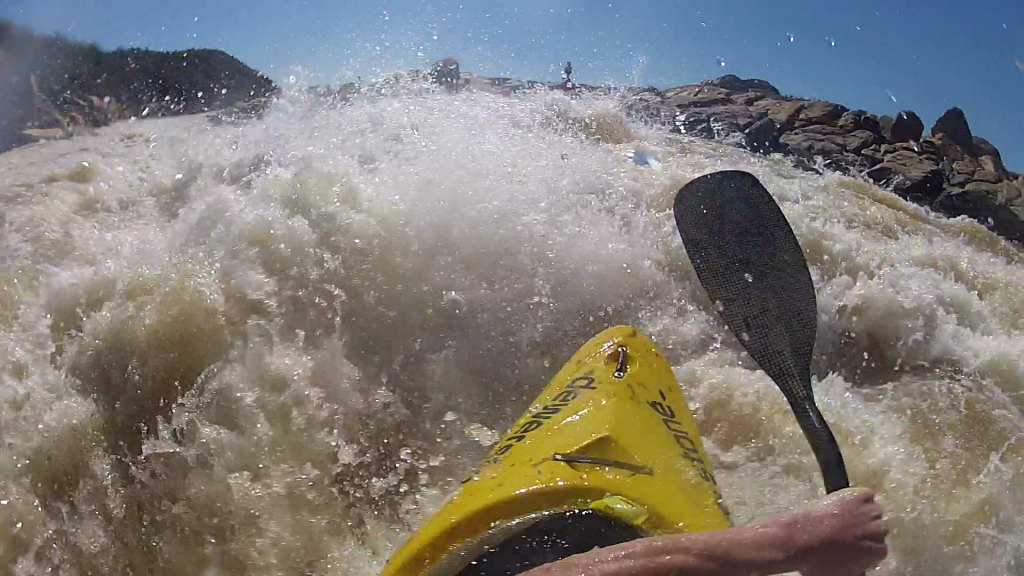 Leslie slips past the pour-over on the first scouted rapid 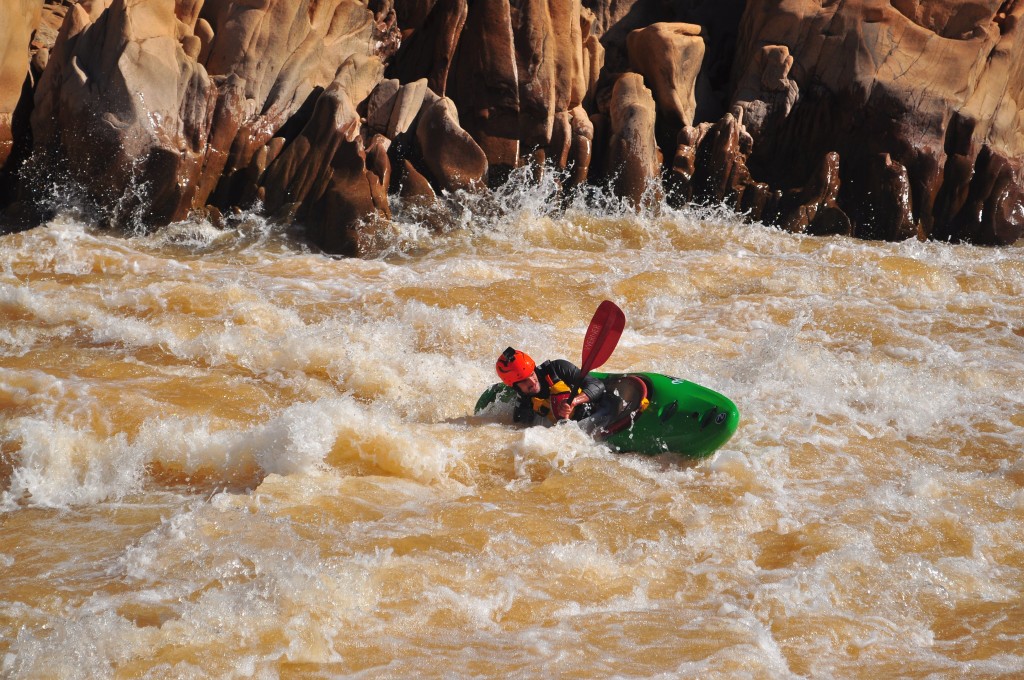 Perhaps a kilometre of read-and-run grade 4 boogie followed before the Ikopa’s next scout-worthy offering. Though certainly not as continuous, or even steep, as the first, this multi-step rapid for some reason set my stomach churning (although this could equally be attributed to my bowel’s then less-than-stable status); a sloping tongue flowing into a steep V-hole and boiling pool, immediately charging over a river-wide ledge-hole that dealt out some serious downtime to Leslie and Jacob. Once again, following a remarkably smooth line that found Campbell and me sharing a whirlpool-ish eddy for a short while, most of us agreed that it was probably the single largest rapid we had ever run! 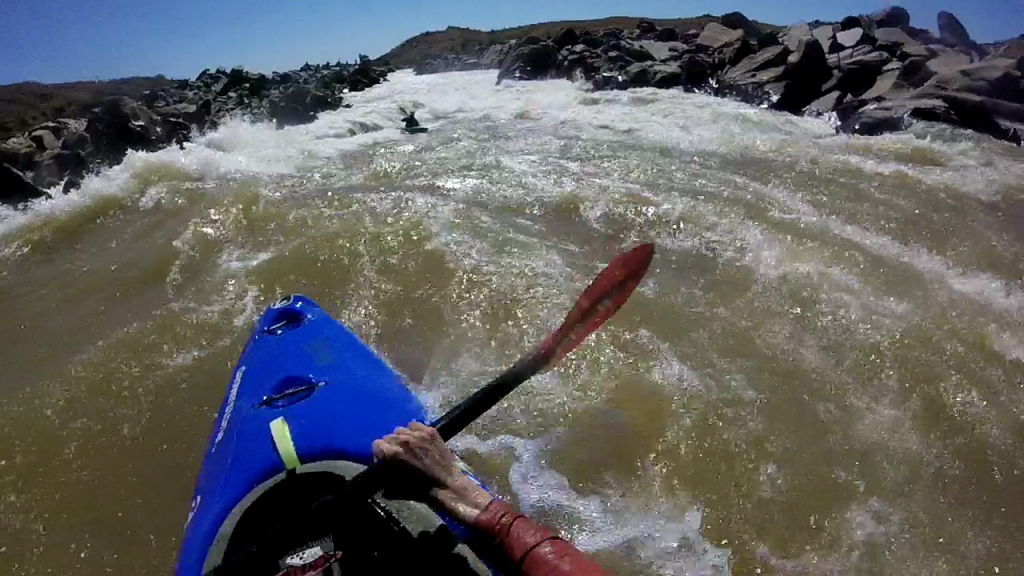 But the rapid was not yet over! Jacob confirmed that the river once again dropped off round the corner, but insisted that the line was simply “good to go; just aim far right at the bottom”. He failed to mention certain vital aspects, such as the first large hole in which I back-looped, span, hit Campbell in the ribs with my stern as he passed and generally received a significant beating, or the second (or indeed third) hole(s), in which Sam enjoyed some equally pleasant hospitality from the river. Of course, the bottom of the rapid found us all grinning and jokingly berating Jacob for his sensational misinformation – but in his defence, the rapids do look much smaller from the bank!

A long flat pool led to a further horizon-line. The rapid that this heralded was, at a conservative estimate, around a kilometre in length, steep and boulder-strewn. One rooster-tail in particular belied a rock that would almost certainly have delivered fatal hits if a paddler failed to stick the line higher up. After nearly half an hour of scouting, the majority of us had decided to walk around, and the general consensus was that lunch was in order. Here, Campbell proved himself the hero of the day, producing 6 Mars Bars procured in the western supermarket the day before! 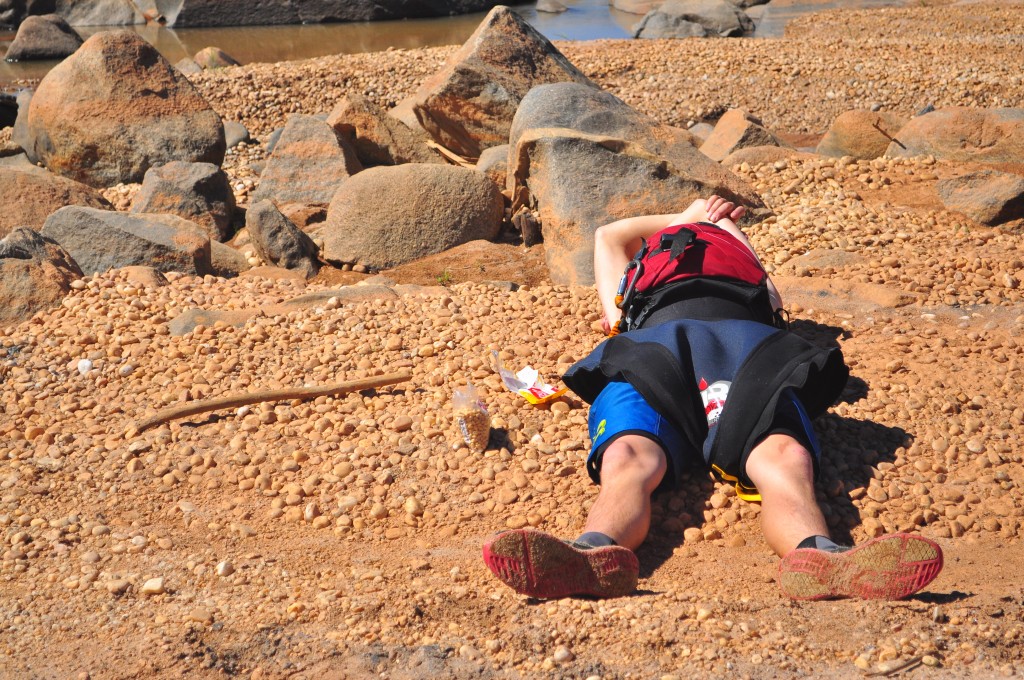 The lunchtime portage, complete with sunbathing for Jacob (who insists that paddling in clothes is a waste of good sun), lasted nearly 2 hours. Worse still, we had barely got back in our boats and taken a paddle-stroke when we came upon the next portage. This, we are fairly sure, was the “definite portage” that Bradt and Levinson had mentioned a few days before. The rapid, choked with rocks and charging down into a monumentally disgusting slot (although Jacob is fairly confident there was a “sneak-line down the left”), followed by a simply unmentionably awful twenty-foot pour-over hole with a towback that was sucking in all flora and fauna within a ten-mile radius, necessitated another portage! 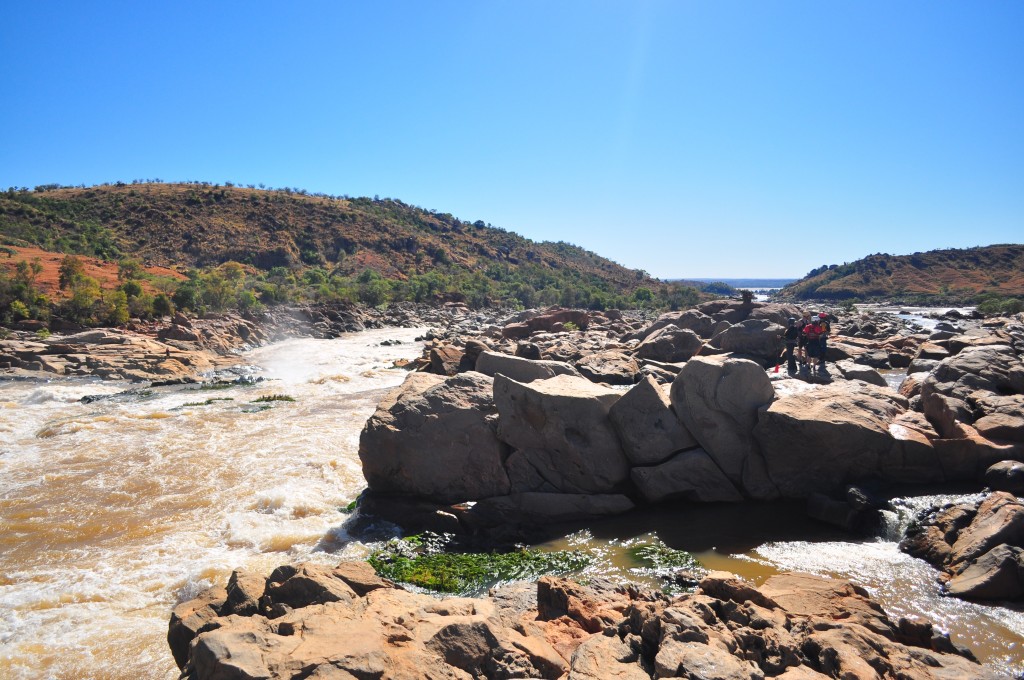 Following this monstrous portage, and sat in relative safety in an eddy that ebbed and flowed like the sea, the team concluded that this was probably one of the largest rapids they had ever seen (astute readers will have begun to observe a pattern at this juncture!). The run-out of this rapid was a fantastic wavetrain, after which we assumed the main events of the day to be behind us…

Nearly 3 hours later, after many more significant rapids of varying timbre, gradient and buttock-clenching intensity, including a particularly memorable tongue that spat me upside-down into a horrible cauldron, we slid happily into the ferry-town at the takeout, exhausted but exuberant, and ready to devour an unreasonable amount of spaghetti bolognaise, chips and bananas! 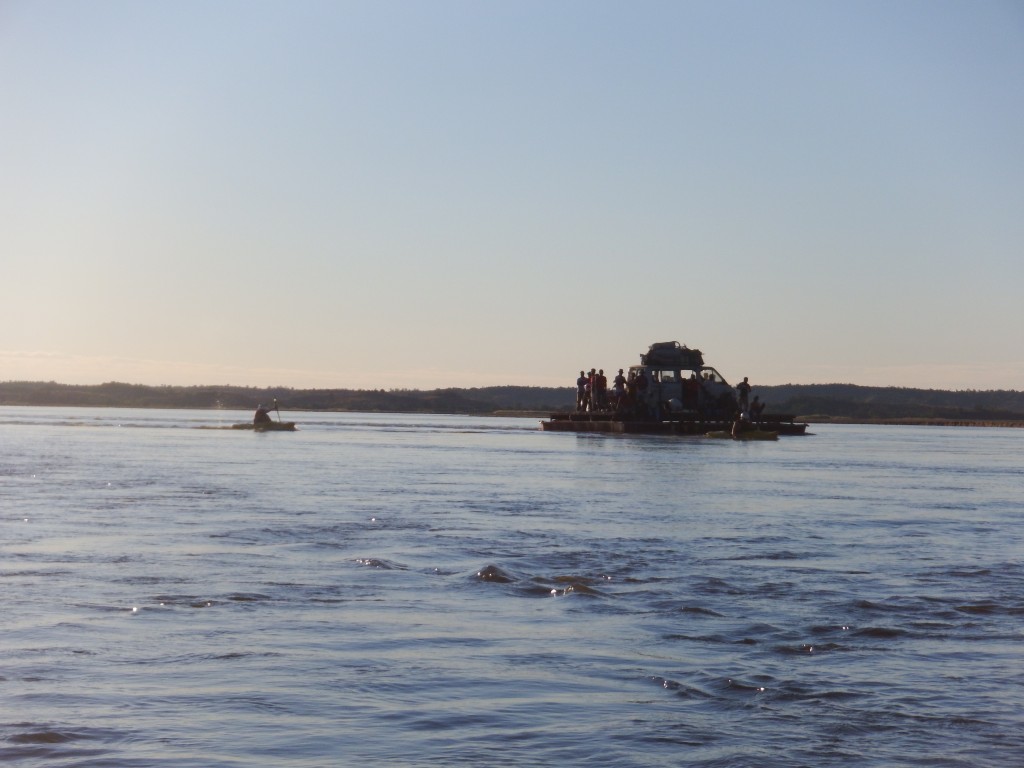 Leslie chasing a ferry at the takeout

Despite the rest of the group being unanimous in their opinion that the Ikopa constituted a major milestone in their paddling careers, and contained some of the largest whitewater they have ever encountered, Sam nevertheless maintains that the Dart on the first step is both bigger and scarier! He is wrong, but we choose to humour him!